Have you ever wondered what people are talking about on the Maes?

For non-Welsh visitors at the Eisteddfod, to appreciate those traditional folk events can be a big challenge. While you may feel like a fish out of the water, Paul Sandham and his team have developed an app that will equip you with an accessible interpreter for people just like me. O Glust I Glust, or From Ear to Ear, is the name of the revolutionary app. According to its website, the system needs two apps to work. One used by the translator and the other by the listener. The translator simply creates the “event” which the listener selects in order to hear the simultaneous translation over headphones.

Both apps are free of charge. One of its advantages is it is very mobile. All you need to have is a smart phone. As long as one of your Welsh speaking friends speaks to the phone, everyone else will be able to enjoy anything from a Welsh speech to a Welsh play.

While they are still developing the system, Paul’s team is largely testing the O Glust I Glust app at the Maes for the whole week.

As Llaisymaes’ editor of the day, I myself tried the wonderful app at the 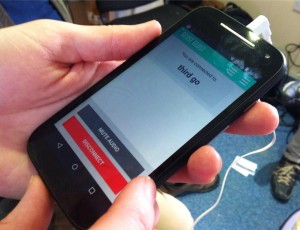 press conference in the morning. It’s very simple, and definitely beneficial for non-Welsh speakers who want to get the most out of any Welsh speaking events.

The next step is in tourism. The company intends to expand the market to benefit tourists from every corner of the world to appreciate the Welsh language and cultures.