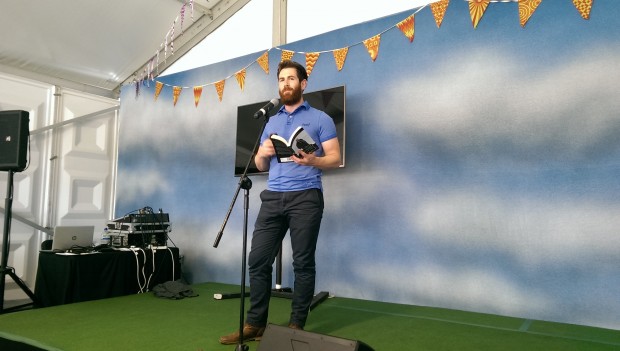 “I would not have been a Welsh poet if it had not been for Tolkien”.

That is how Eurig Salisbury, a Welsh poet and a huge Tolkien fan, opened his lecture about the connection between Tolkien and the Welsh language. In front of the packed Maes D tent, he argued that Tolkien found great inspiration in Welsh language for his world-famous The Lord of the Rings book trilogy.

Salisbury pointed to a lecture given by Tolkien at Oxford on 21 October 1955, just a day after the third LOTR book was published. In the lecture read out by Salisbury, Tolkien referred to the Welsh language as ‘beautiful’ and ‘dangerous, and yet desirable’. In his own words, he aspired to invent a language that would have ‘the Greekness of the Greek’.

Salisbury says Tolkien used Welsh grammar and the roots of the language to come up with many names and places by playing with words. One significant example of the Welsh influence on Tolkien’s fantasy world is Sindarin, one of the elven languages Tolkien invented for The Lord of The Rings. Now Sindarin has it’s own fan base who make sure the language can be learned online.

It was Tolkien who inspired Salisbury to become a writer. “I knew I was going to write when Gandalf fell into that dark pit,” said Salisbury, referring to the LOTR: The Fellowship of The Ring scene in the mines of Moria. At the time Salisbury was around 14 years old when he got drawn into the world of Tolkien. “I wanted to create the same feeling in people,” he said.

At the end of the session, in a half-humorous tone Salisbury brought an interesting idea of whether Tolkien’s work could be translated in Welsh. He thinks the translator would definitely find help in the existing Welsh poems in order to translate the poems used in Tolkien’s fantasy world.

Having been so engaged by the connection between  the Welsh language and Tolkien, Salisbury couldn’t help but wonder if Tolkien would visit Eisteddfod, had he been alive. “I think he would love to be here,” said Salisbury.