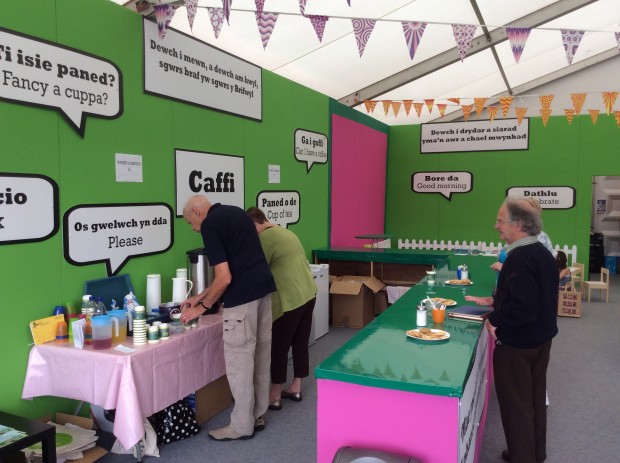 If you were ever scared by the sound of Welsh language, worry no more.

At the Maes D tent, the Centre For Learning Welsh, you can take a beginner course in Welsh and blend in the Eisteddfod crowd in style!

Caroline from Devon, Jon from London, Toshi from Japan and Iban from the Basque country came for their first ever Eisteddfod experience. This morning they took a Welsh language taster session and came out of it alive!

After learning how to introduce themselves and say basic feelings, they discovered different greetings and the times of day. They were then thrown into conversation with some native Welsh speaking crowd in the social area. They also learned how to ask for different food and drinks – something very useful at the Eisteddfod!

In the end, the participants did a recap of what they had learned and received a summary to help them put their newly discovered language into practice.

Learning Welsh is not the only thing on offer at the Maes D. The Centre For Learning Welsh also has a book shop, a crafts & arts corner for children, as well as a tea and coffee stand.

If you would also like to try out the Welsh language taster session, you can do it at the following times: