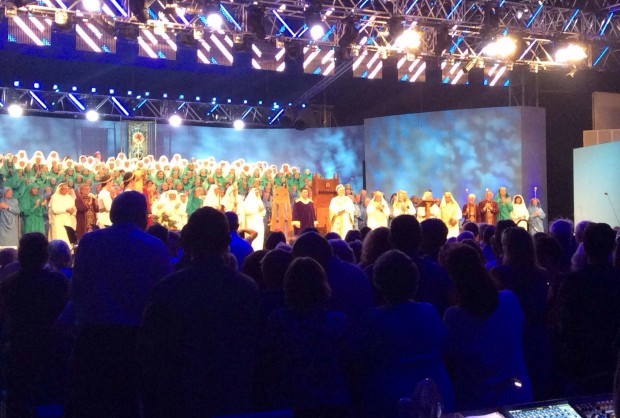 This afternoon one of the most important events of the National Eisteddfod took place at the pink pavillion. The chairing of the bard was awarded one more time to the poet who creates the best poem in cynghanedd, a very strict verse that requires a perfect command of Welsh language and poetry.

The winner was named Ceri Wyn Jones, who has actually already won this award in the past. The ceremony this afternoon was especially emotional because he is from Carmarthenshire and so the vibe was great at the pavilion.

Originally, Ceri Wyn Jones is from Aberteifi but has very close connections with the home of the Eisteddfod this year in Llanelli. His father was a minister within the town.

This has been the busiest of all the Gorsedd ceremonies during this week. There were long queues outside the pavilion far before the begining of the Chairing and, in contrast with the other ones, there was far more youth as well.

The first ceremony of this kind took place in 1819, but the tradition of awarding a chair to the best poets goes back to the tenth century. However, the adjudicators do not need to give the chair to anybody if the poems are not good enough to deserve it. Actually, this year the competition has been one of the weakest according to the adjudicators, who said that there have been many “tired poets” running for the award – Ceri Wyn Jones still managed to rise to the occasion though.

The ceremony has proved one more time how rich Welsh culture is and how new talents are ready to keep Welsh literature alive. The packed pavilion demonstrated that there is enough interest from the public and that people still appreciate these celebrations of the Welsh uniqueness.