A fascinating celebration of over 20 triple harps was held at Ty Gwerin this year. Beautiful music flowing out of the yurt which has been filled with enthusiastic listeners.

While most are senior artists, Cerys Havana Hickman is one of the few very young talents. She first started with harp when she was 8. When
her mom first asked her whether she wanted a harp, she said, “more than anything in the world.” Three years later she began performing in the public.

enough, and she’s been playing it for two years now.

For today’s performance, she and her teacher started rehearsing two months ago. But they never got together as a whole with other some 20 people. “I’ve known lots of the pieces for quite a while so I just put them all together. It didn’t take me long to rehearse.” 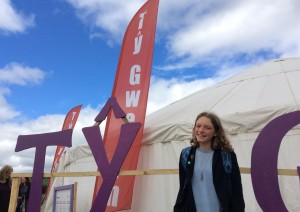 Apart from harp and triple harp, Cerys also plays the piano and violin. You won’t be too surprised if you discover another musician  in her family-her mom was just going to sing at Maes D after supporting her daughter’s performance at noon.

For a taste of the beautiful triple harp, it’s here for you…