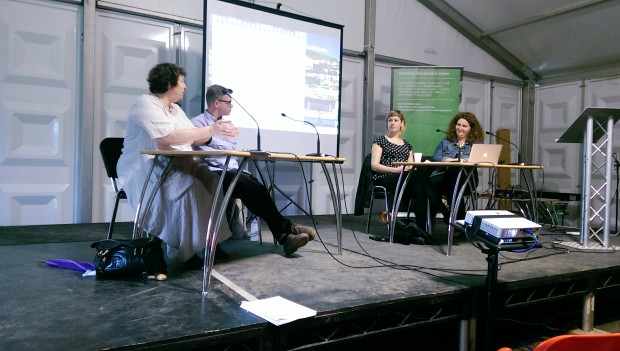 Should the voting age be lowered to 16 years old?

Research conducted by the National Assembly for Wales showed that, overall, young people in Wales did want the voting age to be lowered. Out of 10,375 respondents (aged 11 to 25), 53% said yes to lowering the voting age to 16, and 58% claimed they would vote at an election tomorrow if they could.

These are a couple of statistics that have emerged. The original question was enhanced by the Scottish referendum held in September 2014, where young people were allowed to vote.

But one major issue that came up was the question of political education. The research showed that 79% think it is important for young people to learn about politics and the voting system.

This was highlighted by the panellists who were present today on the Cymdeithasau 2 stage of the Eisteddfod.

Christian Webb, from Llais Ifanc at Youth Cymru thinks that “political education should be part of citizenship education” so as to make young people realise how “everything, ultimately, comes down to politics”, including every day life things like school transportation. He insisted on the fact that it is not only youths in schools that need to be enlightened on politics, but also those who leave school to work. It is important that every voice is heard.

Helen Mary Jones, director of Youth Cymru, spoke from experience about the poor political education of young people in the UK. She remembered being disciplined after talking about the miners’ strike when they happening because of the controversy. Today, she wants teachers to feel more confident talking about politics in class.

“The political ethos has changed now though,” she said, “parties should think more creatively in the way they engage young people.”