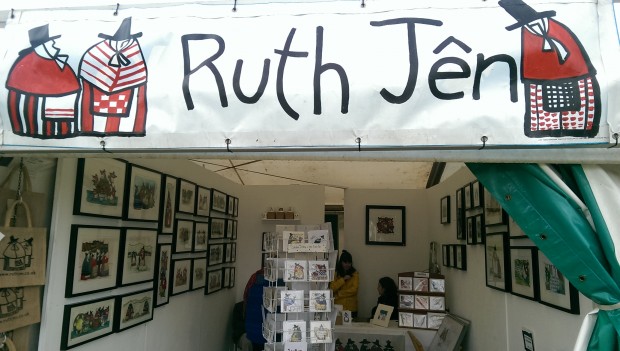 They are the Welsh icon and everyone knows them by their characteristic appearance. A striped petticoat, worn under a bedgown, both in flannel, completed with an apron, shawl and a tall, black hat. However, the Welsh Ladies that Ruth Jên Evans, an artist from Aberystwyth, portrays are much more than that.

“They’ve got a bit more attitude, and they are like, ‘we’re not going to sit back and drink tea, we also play around and dance”, says Ruth, whose artwork pictures the Welsh Lady icon, as she says, in a more subversive way.

The characteristic Welsh national costume originated from what the country folk would have worn. They would make the clothes out of the wool that would fall from the sheep. Far from then latest trend in fashion, the costume was convenient as it was waterproof, durable and warm.

With mono prints, linocuts and collage paper being just some of the techniques Ruth works with, she brings back the tradition, as well as changes the simplistic and touristic view on the icon of the Welsh Ladies.

“At the end of the 19th century, lost of photographers came to Wales and they would ask women to dress up in the national costume and take a photo of them,”she says, “they would picture how they are enjoying tea, when in fact they would never wear those costumes.”

That is why Ruth plays around with her pictures. Previous images picturing the Welsh Ladies would be named “The Welsh Tea party”, but she is looking to make them more appealing by playing with words and images. She leaves the names of the pictures in Welsh on purpose, so that the viewers can get their own understanding of her artwork.